First days of spring knock on the door. Meteorologically only, of course – we need to wait a few more weeks for real spring to start. The trees grow new leaves and the daffodils bloomed, too. Dubrovnik was showered with heavy rain in the morning but already by early afternoon the wind changed direction, the air became crisper and the humidity went away. The remaining puddles of water mirrored the sun’s reflection and the city soon buzzed with life again.

All of a sudden, there seems to be something new going on in Dubrovnik. The long beauty sleep is finally finished, all the dreams people had for the Town are coming true. Even though the time of the mascarade is over, the main street and the old port still wear a disguise.

Just like with Game of Thrones, Star Wars or the Indian spectacle Fan, Dubrovnik is once more the perfect set for another long awaited blockbuster: Robin Hood: Origins. The preparations lasted longer than usual, the scaffolding and the decor for the film-shooting grew in shape slowly. This gradual development allowed the locals to use their imagination about how it might all look like on the big screen.

View to Robin Hood filming from our Domino Apartment

Now, the newspaper headlines and social networks are full of juicy titles and photos featuring the stars of Robin Hood: the Academy Award-winning Jamie Foxx and the very popular Jamie Dornan. The filming is undergoing day and night on different locations, parallel to the everyday town life. The film is set for release by end of March 2018 and Leonardo Di Caprio, another famous Oscar awarded actor, will be producing this atypical interpretation of a well-known classic. All the facts point to a major success; Dubrovnik is again honoured to play a significant role in the process.

Tourists are a rare sight to see, but not completely absent. There are enough connecting flights and accommodation options but the most important part is the weather. It is much better than in most European countries! There are some surprises from time to time, but the average winter temperature of 10°C/50°F and plenty of sun exposure vouch for a relaxing weekend getaway. 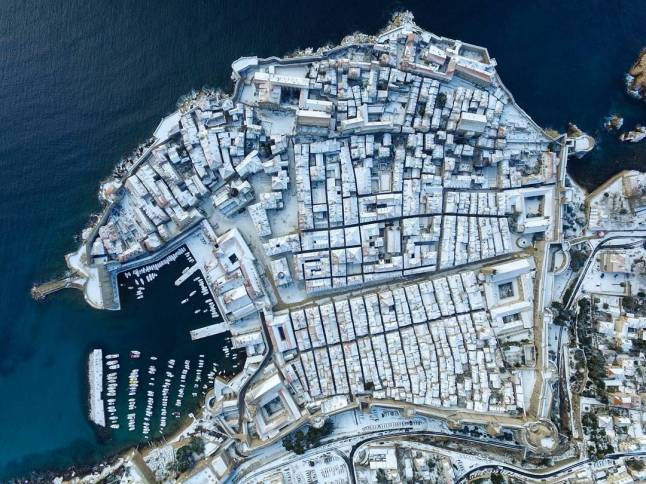 What could attract you to visit Dubrovnik during low season is the fact that you can do it even on a tight budget – the basic prices are much lower than the very popular summer months. An added bonus that is definitely an important highlight: you do not need to elbow your way through the crowds and all the beauty of the city and its surroundings seem almost heightened by the quiet tones of the mild springtime sun.

The openness of the space around you and the simplicity of the locals’ lifestyle will enchant you. Everything seems to move at a slow pace, the mood is lighter, the smiles on peoples’ faces genuine. When you are not hunting for a glimpse of a famous Hollywood star or researching the museums for more stories about different habits, rituals and cultural heritage, you will be out and about.

If you are a food enthusiast, keep in mind that March is the perfect time to be in this region! The oyster season is celebrated in Ston town on St Joseph day, March 19th. The oysters from Ston are unique in the world, small in size but full of flavour; a true delicacy enjoyed only in Croatia.

Those first-hand impressions of faraway places stick with you forever and spark the curiosity to find out some more. So, for this spring keep Dubrovnik in mind.