If you have ever been to Dubrovnik then it will be clear why Game of Thrones loves the city. The two are inseparable, a match made in heaven. Six years ago when the producers at HBO decided to film a historical fantasy series you would have been forgiven in thinking that they always had Dubrovnik on their minds. The truth was that they had never been to the city; Dubrovnik was not ever at the back of their minds. But a twist of fate, could well have been destiny brought the Game of Thrones cast and crew here.

“As soon as I walked through the city gates I thought I was walking into a dream, is was as if I had entered a living breathing scene from the series,” said one of the producers of the show to us on a visit here. He isn’t wrong. From that day, five seasons ago, Dubrovnik has been the capital of the seven kingdoms, Kings Landing. It has also been the capital of the world for the millions of fans of the popular series. Little did we know all those seasons ago what the Game of Thrones effect would be, we are truly best friends forever.

“Where did they film Game of Thrones,” if I had a Euro for every time I had been asked that question we would be sailing off into the sunset on a mega yacht. There are around twelve locations in and around the city, from the island of Lokrum, the Trsteno Arboretum and the historic walls themselves. Pick up a “GOT” map at the Dubrovnik Tourist Board and follow your nose. Yes, lots of computer generated graphics were used but the scenes where the Lannister family did their deeds are easily recognizable. These walls haven’t changed their look for hundreds of years; with a map you’ll soon be able to relive the action scenes in your imagination. There are many, many Game of Thrones tours in the city, some great, some a rip-off, but with a good map and an imagination you can pretty much do it all yourself. 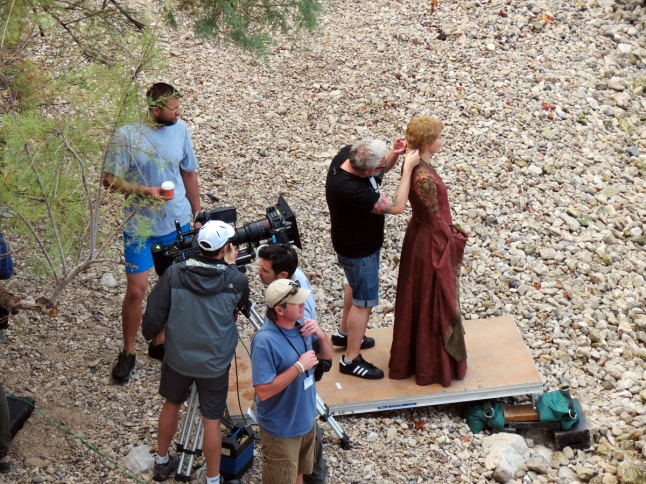 Lena Heady as Cersei Lannister during filming of GOT in Dubrovnik

But if you are looking for the inside scoop then why not visit the city when they are actually filming the series. There is a chance of seeing Tyrion Lannister up close and personal. The cast and crew normally make their way to our city on the Adriatic at the end of summer, September and October are popular months for filming, so keep your ear to the ground and your eye online and you find the dates. After all when the Game of Thrones comes to town it is hard to keep it a secret.

“The Greatest City that Ever Was or Will Be!”